so we're fucked huh?? too bad

if anyone needs me text me, wont be around for a few days

There'll be a meet regarding the potential on-board refugee-run defence organisation within a fortnight. Aims of the meet: to discuss the groups's structure and intent; time for questions, ideas and concerns; discussion of the possibility to use the group as a tool for teaching and preparing those without a predefined military skill set or understanding; an opportunity to offer up teaching services and strategic services for those interested in involvement in areas outside of direct training.

The meet's open for anyone. If you want to attend, please leave your name in a private response - I'll get back to you with the date and venue once they're concrete. Any questions about the meet or anything related can be directed to Abarai Renji in the meantime.


[that sent out, Renji finally settles down to relax. for the past few weeks, he's been working quietly and tirelessly, making sure he's got everything sorted and settled, plans made and tightened and ideas ready to be put forward to whoever wants to listen]

[now, though? now that it's out there and he's set the ball rolling and there's nothing to do but wait? it's about time he immediately decimate his own credibility with a quick declaration of:]


[ooc: responses to names given will come in the form of a link to the log in a week or so's time, unless accompanied by a question or comment he feels needs a personal response! 8)]
[alright i admit defeat this shit isn't coming out on it's own] 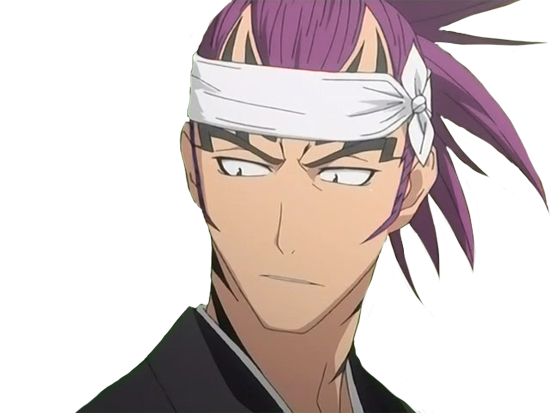 I, uh. I needa talk t'someone who's good with hair.

[see Renji sitting cross legged in front of a wall]

[see Renji casually sip from one, squint a little, then go back to staring]

[this is going to be a long month]

[the Guide flickers on to Renji. contrary to usual, he's dressed in his uniform, expression set in a humourless concentrated frown]

[even his speech is different - more clipped, precise. the same unpolished drawl but a little neater, a little flatter. this isn't the Renji who drops his Guide into unflushed toilet water, nor the Renji who spends hours at a time sitting in front of the TV screen doing his best to beat his roommate's latest high score on M*rio K*rt. this is a whole different ball game. this is the lieutenant he's never had to be while aboard the Thor. he wastes no time getting to his point]

Back home, we're fightin' a war. Been thinkin' about that, an' I realised a couple things. First, we probably weren't th'only ones. Second: If the enemy turned up right now, m'honestly not sure we could beat 'em. Couple of 'em, sure. Maybe take out a chunk o'the problem. But if the big cheese turned up, right outta the blue, I couldn't give ya any promises, much as I'd wanna say it'd be easy, that we're strong enough and got enough numbers to win.

This ship picks us up from all over the place. Pretty sure it doesn't differentiate too much between the good guys an' the assholes tryin' to blow 'em apart. We've been lucky enough up 'til now, an' that's fine, but ya can't count on luck. One o' these days, luck ain't gonna fall on our side.

( Collapse )
[obnoxious sniggering and a whole lot of visual jostling]

[finally, the feed settles... on fleshy mounds poking out through two holes cut in a sheet of black material. ladies and gentlemen, welcome to some little buttocks. they wiggle along with the audio]

Hey, lookit me! M'a shinigami! Pleased t'meet ya, everyone! If ya need me, I'll be around. Doin' things shinigami do. Bein' a shinigami. Y'know, th'usual shinigami stuff, lookin' all big an' tall an' strong an' a little squidgy I guess an' maybe stinkin' up the place some when I ain't eatin' so great an'-- an'-- pshh---

[he opens his mouth to speak--]

[feed opens to a beady, yellow eye staring right into the camera. right. at. you. the eye moves away a little after a while to reveal a white snake, apparently hovering in front of the screen. in the background, if you look carefully, is a shock of red hair and the bold black lines of obnoxious tattoos...]

[yes. the snake is talking. pretty promptly after this, there's another voice, deeper, speech more clipped and precise, polite]

What are you doing?

Givin' the masssster a little trouble. Nothin' he can't handle--

[that grating, hissing voice from the snake is quickly smothered as a... large furry foot? slams down on its neck, the snake temporarily disappearing from the feed only to be replaced with... a very large white baboon.]

Please excuse us. We are simply a particularly slippery snake and a chittering ape passing humbly through. Do not pay us any mi--

Abarai Renji! Heard of him? We know aaaaaall there is to know about the guy. Wanna hear ssssomething sssscandalous? Look no further. Got a quesssstion ya want a decent ansssswer to? We're your guy. Don't hessssitate t'ask.

[there's a pause, one waiting, one considering... and then the ape pipes up again]

... Of course, an answer is always best greeted with an answer. We should very much like to know what Abarai has been up to whilst we've been sleeping. Not that everything has gone unnoticed, but it can never hurt to add a few detailed stories to a broad tale.

[again the snake sllllides into view. if it were possible for a snake to move smugly, that would be the way it's moving as it dances through the air, drifting backwards into the feed until it's hovering over Renji's head for a second. tongue flicks out, along with a little 'heh', and then it's darting back up close to the screen again, baboon watching its every move through calm yellow eyes]

[FOOT SLAMS DOWN snake disappears, squawks, and is silent]

[ooc: replies will come from Zabimaru for a while! the snake and the ape. DISCLAIMER: any answers given might not be wholly honest or complete ljhdfgkj. Renji will wake up later!]

[a video feed switches on, and for a few seconds there's not much more than a chest shot and a close up of a really tawdry bandana... then the camera jostles a little and it's Renji, and he's looking kinda shifty (and is he seriously wearing that bandana around his neck it's kind of hideous). he glances one way... then the other... then directly at the Guide, leaning in close and bringing his hand up as if to shield his mouth

when he speaks, it's barely louder than a whisper. this is between you and me, Guide, okay?]

Hey. So, uh... anyone asks, I'm a real great guy. An upstandin' member o' society. "Abarai Renji? Oh, sure! That guy helped me outta a rough patch a while back!" "Abarai? Oh, yeah. He's that guy who rescued a whole ton o' orphan tentacle babies from that ragin' lingerie store fire a while back, right?" That kinda stuff. Y'know. Don't gotta make th'sun shine outta my ass or anythin', but a couple rays wouldn't go down so bad.

Uh... if ya need an incentive, call it a redeemable thing. You scratch my back, guess I could stretch t'scratchin' yers a little somewhere along the way. Yeah? Great. Right. I'll hold ya to it.

[then something from offscreen gets his attention and his head instantly whips that way, and a couple seconds later he slams his hand down on the Guide to turn it off]

[the guide is apparently pointing at a mirror; it shows a reflected door, the mirror image of the guide itself, an assortment of handwashes, soaps (a massive can of hairspray) and other such sanitary/vanity related products. there is also a large tuft of rather red hair sprouting from the top right corner]

[renji steps into view and there's more water effects as he turns the tap on, washes his hands, looks up at the mirror, looks back at his hands, looks up at the mirror again, squints, leans closer, pulls vigorously at the corner of his eye to try and smooth out a wrinkle, frowns in distaste, moves his hand up to his forehead to smooth at his alarmingly triangular hairline, squints some more, raises an eyebrow, changes his angle, considers, strikes a macho pose, checks himself out, grins lewdly, wolf whistles, chuckles, turns to find the towel to dry his hands-- thwack]

[you are now submerged in water, dear viewer]

[a giant white sheet of disintergrating somethingorother drifts over the camera and covers the view; the feed shuts off not long later]
Collapse